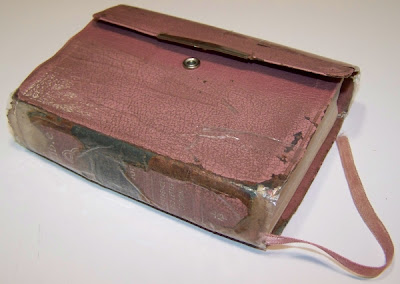 This little Bible presented me with a couple of challenges I had never faced before. First, it had a flap on it. None the Bibles I had done before (years ago) had a flap on them. I had to figure out how to construct the case with a proper flap. I was able to use the old case as a pattern for starters. The second challenge was the bar snap. I had never worked with snaps of any kind before. I first had to find where I could purchase new bar snaps. I bought the only ones I could find anywhere and they turned out to be rather cheap looking. I sent them to my uncle who is a jeweler and he was able to plate it in real gold. They came back looking really nice. 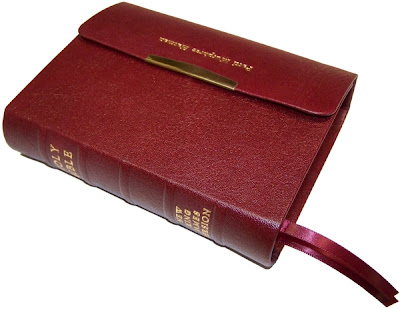 Here is the finished product. I used a crimson colored goatskin leather. Where do you stamp a persons name on a Bible with a flap? I chose to put it on the flap itself just below the new bar snap. Also, the lining on the inside of the flap itself (not shown) is made of the same leather pared down real thin. She was pleased with the results. This was done in June, 2010.
Posted by Alex Ogden at 5:41 PM

Email ThisBlogThis!Share to TwitterShare to FacebookShare to Pinterest
Labels: Bibles

Alex Ogden
Pinson, AL
I am a preacher of the gospel of Jesus Christ, currently working with the Clay church of Christ in Clay, AL. I am married with 3 kids and 1 granddaughter (so far). On the side I do traditional hand bookbinding, mainly working on rebinding Bibles for people.