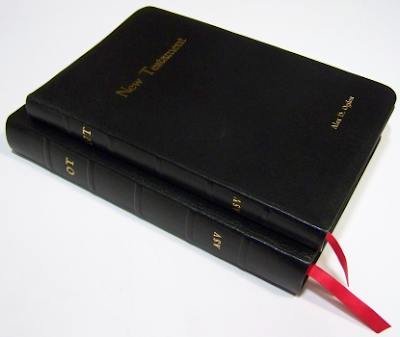 These two Bibles were rebound in the fall of 2009 and are my personal Bibles that I now preach from. They were bound in black goatskin. Yes, you are seeing it right. There is an OT and a NT. I didn't use the New Testament from that Bible (used a separate NT) so when I first became a bookbinder 25+ years ago I cut the NT off and bound it as just an Old Testament. As I remember I was lucky in that the OT ended near the end of a signature (folded section of the book). This allowed me to carefully remove the NT and rebind only the OT. The NT I was using at the time was actually what I learned the basics of bookbinding on, being taught by Bill and Helen Smith (the "Booksmiths") on Montreat, NC. That NT held up and was in use until I rebound this new copy of that same NT. I still use the original at my desk.
Posted by Alex Ogden at 9:23 PM

Email ThisBlogThis!Share to TwitterShare to FacebookShare to Pinterest
Labels: Bibles

Alex Ogden
Pinson, AL
I am a preacher of the gospel of Jesus Christ, currently working with the Clay church of Christ in Clay, AL. I am married with 3 kids and 1 granddaughter (so far). On the side I do traditional hand bookbinding, mainly working on rebinding Bibles for people.